Last weekend’s NY Times article, which I wrote about in my last post, has, predictably, resulted in a deluge of responses from many observers.  The comments posted to the NYT “Well” blog (over 160 as of this writing) seem to be equally critical of Dr Levin and of our health care reimbursement system, which, according to the article, forced him to make the Faustian bargain to sacrifice good patient care in favor of a comfortable retirement.  Other bloggers and critics have used this as an opportunity to champion the talents and skills of psychologists, psychotherapists, and nurse practitioners, none of whom, according to the article, face the same financial pressures—or selfishness—of psychiatrists like Dr Levin.

While the above observations are largely valid (although one colleague pointed out that psychologists and NPs can have financial pressures too!), I chose to consider the patients’ point of view.  In my post, I pointed out that many patients seem to be satisfied with the rapid, seemingly slapdash approach of modern psychopharmacology.  I wrote how, in one of my clinic settings, a community mental health center, I see upwards of 20-30 patients a day, often for no more than 10-15 minutes every few months.  Although there are clear exceptions, many patients appreciate the attention I give them, and say they like me.  The same is also true for patients with “good insurance” or for those who pay out-of-pocket:  a 15-minute visit seems to work just fine for a surprising number of folks.

I remarked to a friend yesterday that maybe there are two types of patients:  those who want hour-long, intense therapy sessions on an ongoing basis (with or without medications), and those who are satisfied with quick, in-and-out visits and medication management alone.  My argument was that our culture has encouraged this latter approach in an unfortunate self-propagating feedback cycle:  Not only does our reimbursement process force doctors (and patients) to accept shorter sessions just to stay afloat, but our hyperactive, “manic” culture favors the quick visits, too; indeed, some patients just can’t keep seated in the therapist’s chair for more than ten minutes! 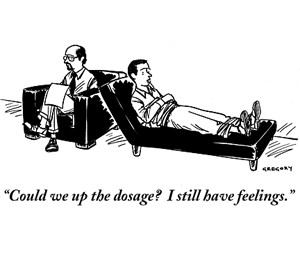 She responded, correctly, that I was being too simplistic.  And she’s right.  While there are certainly examples of the two populations I describe above, the vast majority of patients accept it because the only other option is no care at all.  (It’s like the 95% of people with health insurance who said during the health care reform debate that they were “satisfied” with their coverage; they said so because they feared the alternative.)  She pointed out that the majority of patients don’t know what good care looks like.  They don’t know what special skills a psychiatrist can bring to the table that a psychologist or other counselor cannot (and vice versa, for that matter).  They don’t know that 15 minutes is barely enough time to discuss the weather, much less reach a confident psychiatric diagnosis.  They don’t know that spending a little more money out of pocket for specialized therapy, coaching, acupuncture, Eastern meditation practice, a gym membership, or simply more face-time with a good doc, could result in treatment that is more inspiring and life-affirming than any antidepressant will ever be.

So while my colleagues all over the blogosphere whine about the loss of income wrought by the nasty HMOs and for-profit insurance companies (editorial comment: they are nasty) and the devolution of our once-noble profession into an army of pill pushers, I see this as a challenge to psychiatry.  We must make ourselves more relevant, and to do so we have to let patients know that what we can offer is much more than what they’re getting.  Patients should not settle for 10 minutes with a psychiatrist and a hastily written script. But they’ll only believe this if we can convince them otherwise.

It’s time for psychiatrists to think beyond medications, beyond the DSM, and beyond the office visit.  Psychiatrists need to make patients active participants in their care, and challenge them to become better people, not just receptacles for pills.  Psychiatrists also need to be doctors, and help patients to understand the physical basis of mental symptoms, how mental illness can disrupt physical homeostasis, and what our drugs do to our bodies.

Patients need to look at psychiatrists as true shepherds of the mind, soul, and body, and, in turn, the psychiatrist’s responsibility is to give them reason to do so.  It may cost a little more in terms of money and time, but in the long run it could be money well spent, for patients and for society.

Psychiatrists are highly educated professionals who entered this field not primarily to make money, but to help others.  If we can do this more effectively than we do now, the money will surely follow, and all will be better served.

This entry was posted on Monday, March 7th, 2011 at 6:31 pm and is filed under medications, mental health, psychotherapy. You can follow any responses to this entry through the RSS 2.0 feed. You can leave a response, or trackback from your own site.