The Dangerous Duality of “Dual Diagnosis” 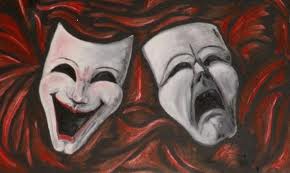 When psychiatric illness coexists with a substance use disorder, we refer to this as a “dual diagnosis.” This term makes clear that we’re talking about two conditions in the same person, which could exist independently of each other (hence they’re also sometimes called “co-occurring disorders”), rather than one disorder causing the other—as seen, for example, in cases of a methamphetamine-induced psychotic reaction or an alcohol-induced depression.

Of course, no two conditions in medicine ever exist truly independently of each other, particularly in psychiatry, and the high prevalence of “dual diagnosis” patients (more than a third of alcoholics, for example, have a co-occurring mental illness, and at least 20% of persons with a mood disorder have a drug use problem) suggests that there’s something about mental illness that makes people more susceptible to addictive disorders, and vice versa.

A “dual diagnosis” label should, theoretically, draw attention to the special concerns these patients face, and to the need for specialized and integrated treatment.  Unfortunately, in practice, this rarely occurs.  Instead, this knowledge often results in compartmentalized care, which may have unfortunate consequences for the dually diagnosed. 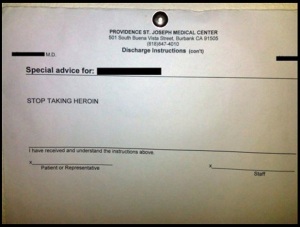 How so?  Consider an inpatient psychiatric ward.  Patients are admitted to these units for brief “acute stabilization,” when they are actively symptomatic, often with psychosis, thoughts of suicide, or other poorly controlled symptoms.  Because these hospitalizations are very short, there’s little or no opportunity to engage in meaningful addiction treatment.  Even when the immediate precipitant of the patient’s acute episode is identified as the abuse of a drug or alcohol, we often discharge patients with little more than a written instruction to “go to AA” or “consider rehab” (or my personal favorite, shown above [click for larger version], which would be funny if it weren’t real).  Similarly, in the psychiatrist’s office—particularly when the visits are only 10 or 15 minutes long—there’s usually no time to discuss the addiction; at best, the patient might get something along the lines of, “oh, and be sure to try to cut down on your drinking, too.”

Even though this is commonplace, it sends a powerful yet dangerous message to the addict:  it says that his addiction is less important than the mental disorder, less worthy of treatment, or, perhaps, impossible to treat.  It might signal to the addict that his psychiatrist is unwilling or unable to talk about the addiction, which may be (subconsciously) interpreted as a tacit approval of the addictive behavior.  (If you think I’m exaggerating, then you’ve probably never experienced the overwhelming power of addictive thinking, and its unique ability to twist people’s judgment and common sense in extreme ways.)

It’s also just bad medicine.  As any ER psychiatrist can attest, substance-induced exacerbations of mental illness are rampant and a major cause of hospital admissions (not to mention medication noncompliance, aggression, criminal activity, and other unwanted outcomes).  Ignoring this fact and simply stabilizing the patient with the admonition to “consider” substance use treatment is unlikely to improve the long-term outcome.

In the drug or alcohol treatment setting, the situation is often quite similar.  Sometimes a therapist may not be aware of a patient’s mental health history or active symptoms, in which case he or she might have unrealistically high expectations about the patient’s progress. On the other hand, if the patient is known to carry a psychiatric diagnosis, a therapist might incorrectly attribute even the slightest resistance—and addicts show a lot of it—to that mental illness (even when the symptoms are well-controlled) and miss the opportunity to make substantial inroads in treatment.  Neither alternative “meets the addict where he is,” challenging him with demands that are appropriate for his capabilities and his level of understanding. 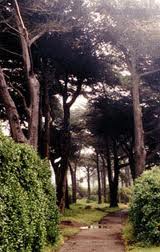 True “dual diagnosis” treatment, where it exists, involves close interaction among addiction therapists, rehab counselors, psychiatrists, and others involved in the mental, physical, social, and spiritual well-being of each patient.  Some psychiatrists are well-versed in the nature of addiction (those who have first-hand experience of addiction and recovery are often well positioned to understand the demands on the recovering addict), and, similarly, some addiction experts are adept at identifying and managing symptoms of mental illness.  With this combination, patients can benefit from individualized treatment and are given fewer opportunities to fly beneath the proverbial radar.

However, for most patients this is the exception rather than the rule.  “Addition psychiatrists” are sometimes little more than prescribers of a replacement therapy like Suboxone or naltrexone, and rehab programs often include mental health treatment “at a distance”—i.e., sending clients to a 15-minute visit with a psychiatrist who’s not involved in the day-to-day challenges of the recovering individual.  Addicts need more than this, and I’ll return to this topic in later posts.

Any discussion about improving real-world psychiatric treatment must address the dual-diagnosis issue.  We desperately need more psychiatrists who are knowledgeable about substance abuse disorders and the interplay between addictions and mental illness, and not just the latest “anticraving” drugs or substitution therapies.  We also need to educate other addiction treatment providers about the manifestations of mental illness and the medications and other therapies available.  Providing compartmentalized or lopsided care—even when well-intentioned—does no service to a struggling patient, and may in the long run do more harm than good.

This entry was posted on Wednesday, March 23rd, 2011 at 6:41 am and is filed under addiction, psychiatry. You can follow any responses to this entry through the RSS 2.0 feed. You can leave a response, or trackback from your own site.

5 Responses to The Dangerous Duality of “Dual Diagnosis”