The FDA Should Really Look Into This Drug

The Food and Drug Administration (FDA) regulates and approves medications for use in humans.  Their approval process is rigorous, and they do extensive monitoring of drugs they’ve already approved (“postmarketing surveillance”) to ensure their continued safety and efficacy.

As a psychiatrist, I see one particular drug used very frequently by my patients, usually prescribed by another physician for management of a physical or mental disorder.  In certain cases, however, I wonder whether it might actually worsen the symptoms I’m treating.  Furthermore, I’ve seen several recent references in the medical literature describing how this particular drug can increase the risk of psychotic symptoms and might even cause schizophrenia, a lifelong condition with high morbidity and mortality.

This month’s British Medical Journal, for instance, contains an article showing that users of this drug are more than twice as likely to have psychotic symptoms than nonusers; it “significantly increased the risk of psychotic experiences” over a 10-year period, and “adjustment for other psychiatric diagnoses did not change the results.”  Similarly, a meta-analysis published last month in the Archives of General Psychiatry showed that “the age at onset of psychosis for users [of this drug] was 2.70 years younger than for nonusers,” and that exposure to this drug “is associated with a decline in cognitive performance in young people.”  Finally, an article in the August 2010 American Journal of Psychiatry reported that use of this drug “is associated with an adverse course of psychotic symptoms, even after taking into account other clinical, substance use, and demographic variables.”

Given all this bad news, it’s surprising that this drug is still on the market—particularly in light of the FDA’s recent decisions to pull the plug on other medications with potentially dangerous side effects:  heart rhythm abnormalities (in the case of Darvon), coronary heart disease (Vioxx), increased risk of myocardial infarction (Avandia), fainting and non-cancerous ovarian cysts (Zelnorm), and so on.  So what gives?

And what is this horrible drug anyway? 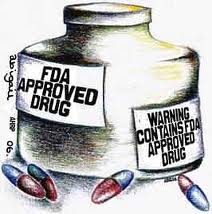 To be fair, asking why the FDA hasn’t withdrawn medical marijuana from the market is not exactly a reasonable question because, technically, it has never been on the market.  The DEA labels it a schedule I drug, which means, according to their definition, that it has a high potential for abuse, no recognized medical use, and no “accepted safety profile.”  However, several states (sixteen at last count, including my home state of California) have approved its use, and annual sales are around $1.7 billion, rivaling the annual sales of Viagra.

Let me point out that I have no official position on medical cannabis.  (See my previous post on the subject.)  I do not prescribe it, but that’s a professional decision, not a personal or moral one.  As noted above, I’ve seen some of my patients benefit from it, and others harmed by it.

Many other substances that are readily available to my patients—whether legal or not—have the potential for both benefit and harm.  People “self-medicate” in all kinds of ways, and we physicians have a responsibility to ensure that they’re doing so in a way that doesn’t cause long-term damage.  We encourage people to stop smoking cigarettes, for instance, and make sure that patients use alcohol in moderation.  (Alcohol and nicotine, of course, are legal but not “prescribed” as medications.)

But once we (i.e., the medical profession and the government) designate a drug as a “medication,” this should imply a whole new level of scientific rigor and safety.  This designation communicates to patients that the substance will provide some sort of measurable benefit and the relative lack of adverse effects when used as prescribed.  I’m not sure medical marijuana passes this test.  Not only have its benefits not been rigorously proven (a fact that is probably due to the reluctance of the NIH to fund such research), but, as demonstrated in the research above, it’s not really “safe” enough to meet criteria for an FDA-approved medication.

As a result, we have a situation where the “medical” label is being used to describe a product that is used for “medicinal” use (although, in my experience, patients often use it for recreational purposes only), but which also has the potential to exacerbate existing conditions or cause new ones.  Medications shouldn’t do this.  Medical cannabis, if subjected to the FDA approval process in its current form, would go nowhere.

Don’t get me wrong:  I understand the potential benefit of cannabis and the compounds in the natural marijuana product, and I support any measure to bring more effective treatments to our patients.  But the current awkward “medicalization” of marijuana imposes too much cognitive dissonance on prescribers and users.  We believe intuitively that it may “help” but also know its potential risks, and that’s hard for any honest physician to endorse.

I see two solutions to this dilemma:  Perform the rigorous, controlled studies to prove its efficacy and safety; or just do away with the whole “medical” façade and legalize it already.

This entry was posted on Friday, April 1st, 2011 at 8:33 am and is filed under medications, mental health, psychopharmacology. You can follow any responses to this entry through the RSS 2.0 feed. You can leave a response, or trackback from your own site.

5 Responses to The FDA Should Really Look Into This Drug