When A Comorbidity Isn’t “Comorbid” At All

When medical professionals speak of the burden of illness, we use the term “morbidity.”  This can refer either to the impact of an illness on a patient’s quality of life, or to the overall impact of a disease on a defined community.  We also speak of “co-morbidities,” which, as you might expect, are two concurrent conditions, both of which must be treated in order for a patient to experience optimal health.

Comorbidities can be entirely unrelated, as in the case of a tooth abscess and fecal incontinence (at least I hope those are unrelated!).  Alternatively, they can be intimately connected, like CHF and coronary artery disease.  They may also represent seemingly discrete phenomena which, upon closer inspection, might be related after all—at least in some patients—like schizophrenia and obesity, depression and HIV, (oops, scratch that last one!).  The idea is that it’s most parsimonious to find the connections between and among these comorbidities (when they exist) and treat both disorders simultaneously in order to achieve the best outcomes for patients.

I was recently asked to write an article on the comorbidity of alcoholism and anxiety disorders, and how best to manage these conditions when they co-occur.  Being the good (and modest—ha!) researcher that I am, I scoured the literature and textbooks for clinical trials, and found several studies of treatment interventions for combined anxiety and alcoholism.  Some addressed the disorders sequentially, some in parallel, some in an integrated fashion.  I looked at drug trials and therapy trials, in a variety of settings and for various lengths of time.

I quickly found that there’s no “magic bullet” to treat anxiety and alcoholism.  No big surprise.  But when I started to think about how these conditions appear in the real world (in other words, not in a clinical trial), I began to understand why.

You see, there’s great overlap among most psychiatric diagnoses—think of “anxious depression” or “bipolar with psychotic features.”  As a result, psychiatrists in practice more often treat symptoms than diseases.  And nowhere is this more the case than in the diagnosis and treatment of addictions.

Addictions are incredibly complex phenomena.  While we like to think of addictions like alcoholism as “diseases,” I’m starting to think they really are not.  Instead, an addiction like alcoholism is a manifestation or an epiphenomenon of some underlying disorder, some underlying pain or deficiency, or some sense of helplessness or powerlessness (for a more elaborate description, see Lance Dodes’ book The Heart of Addiction).  In other words, people drink not because of a dopamine receptor mutation, or a deficiency in some “reward chemical,” or some “sensation-seeking” genotype, but because of anxiety, depression, or other painful emotional states.  They could just as easily be “addicted” to gambling, running, bike riding, cooking (and yes, sex) as ways of coping with these emotions.  Incidentally, what’s “problematic” differs from person to person and from substance to substance.  (And it is notable, for instance, that mainlining heroin = “bad” and running marathons = “good.”  Who made that rule?)

“But wait,” you might say, “there’s your comorbidity right there… you said that people drink because they’re anxious.”  Okay, so what is that “anxiety”?  Panic disorder?  Post-traumatic stress disorder?  Social phobia?  Yes, there are certainly some alcoholics with those “pre-existing conditions” who use alcohol as a way of coping with them, but they are a small minority.  (And even within that minority, I’m sure there are those whose drinking has been a remarkably helpful coping mechanism, despite the fact that it would be far more supportive of our treatment paradigm if they just took a pill that we prescribed to them.)

For the great majority of people, however, the use of alcohol (or another addictive behavior) is a way to deal with a vastly more complicated set of anxieties, deficiencies, and an inability to deal with the here and now in a more direct way.  And that’s not necessarily a bad thing.  In fact, it can be quite adaptive.

Unfortunately, when we psychiatrists hear that word “anxiety,” we immediately think of the anxiety disorders as written in the DSM-IV and think that all anxious alcoholics have a clear “dual diagnosis” which—if we diagnose correctly—can be treated according to some formula.  Instead, we ought to think about anxiety in a more diffuse and idiosyncratic way:  i.e., the cognitive, emotional, behavioral, and existential phenomena that uniquely affect each of our patients.  (I’m tempted to venture into psychodynamic territory and describe the tensions between unconscious drives and the patient’s ego, but I’m afraid that might be too quaint for the sensibilities of the 21st century mind.) 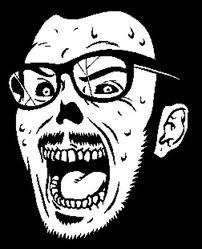 Thus, I predict that the rigorous, controlled (and expensive, and time-consuming) studies of medications and other interventions for “comorbid” anxiety disorders and alcoholism are doomed to fail.  This is because alcoholism and anxiety are not comorbid in the sense that black and white combine to form the stripes of a zebra.  Rather, they make various shades of grey.  Some greys are painful and everlasting, while others are easier to erase.  By simplifying them as black+white and treating them accordingly, we miss the point that people are what matter, and that the “grey areas” are key to understanding each patient’s anxieties, insecurities, and motivations—in other words, to figuring out how each patient is unique.

This entry was posted on Thursday, July 7th, 2011 at 4:45 am and is filed under addiction, psychiatry. You can follow any responses to this entry through the RSS 2.0 feed. You can leave a response, or trackback from your own site.

14 Responses to When A Comorbidity Isn’t “Comorbid” At All