“Dollars For Docs” – What It Really Means

A few weeks ago I received an invitation to an October 1 symposium on Latuda, a new antipsychotic from Sunovion (formerly known as Sepracor).  Latuda (lurasidone) was released about six months ago amidst much fanfare—and very aggressive marketing—as a new atypical antipsychotic with, among other advantages, pro-cognitive properties.

I have only prescribed Latuda to three patients, so I have only limited experience with it.  (In case you’re wondering:  one success, one failure, one equivocal.)  However, I have read several papers about Latuda, and I am interested in learning more about it.  The symposium’s plenary speaker is Stephen Stahl from the Neuroscience Education Institute.  Dr Stahl has received money from Sunovion (which is obvious from his publications and disclosures) but he is also a very knowledgeable neuroscientist.  I figured he would be able to describe the differences between Latuda and the other atypical antipsychotics currently on the market.  So I accepted the invitation.

However, upon further thought, I wondered whether my attendance might represent a “payment” from the Sunovion Corporation.  I was not offered any money from Sunovion to attend this event (in fact, you can see my invitation here: page1, page2).  Nevertheless, according to the Physician Payment Sunshine Act, which was passed as part of PPACA (i.e., “Obamacare”), all pharmaceutical companies and medical device manufacturers, as of 2013, are required to report payments to physicians, including direct compensation as well as “food, entertainment, research funding, education or conference funding,” and so forth.

Despite the mandatory 2013 reporting date, several companies have already started reporting.  Other major drug firms to self-report thus far include AstraZeneca, Eli Lilly, Merck, and Pfizer.  Their reports have been widely publicized at sites such as “Dollars For Docs,” which “allows the public to search for individual physicians to see whether they’ve been on pharma’s payroll.”  Several other sites encourage patients to use this site to ask “Does your doc get money from drug companies?”

The answer is no.  I received no money from Pfizer (and, to be frank, I didn’t prescribe any Pristiq last year, because it’s essentially Effexor).  As it happens, during 2010 I worked part-time at a community mental health clinic.  The clinic permitted drug reps to come to the office, bring lunch, and distribute information about their products.  We had lunches 1-2 days out of the week, consisting of modest fare:  Panera sandwiches, trays of Chinese food, or barbecued ribs.  Most of the doctors didn’t have time to eat—or if we did, we scarfed it down in between patients—but we would often talk to the reps, ask questions about their drugs, and accept product literature (which virtually always went straight into the trash), reprints, and educational materials from them. 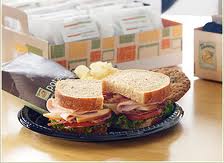 We were visited by most of the major drug companies in 2010.  (BTW, this continued into 2011, but we are no longer allowed—under our contract with the County mental health department—to accept free samples, and we no longer accept lunches.  Interestingly, my Pfizer rep told us that payments would be reported only as of 1/1/11 and NOT earlier; obviously that was untrue.)  All of the lunches were generally the same, and consisted of inexpensive, modest food, mainly consumed by the clinic staff—secretaries, administrators, assistants—since the doctors were actually working through the lunch hour.  I have since learned that the formula for calculating doctors’ payouts was to take the full cost of the lunch (including all staff members, remember), divide it by the number of doctors in the office, and report that sum.   That’s where you get my $306.00.

[In the interest of full disclosure, in my four years of practice post-residency, I have only been offered one “material” non-food gift: about three years ago, Janssen gave me a $100 voucher for a textbook; I used it to purchase Glen Gabbard’s psychodynamic psychotherapy text.]

Anyway, back to the Latuda symposium.  Knowing what I now know about drug companies, I wouldn’t be surprised if Sunovion reports a $1000+ payout to me if I attend this half-day symposium.  (Facility rental + A/V costs + Xeroxing/handouts + coffee service + refreshments, all divided by the # of docs in attendance.)  I frankly don’t want my future patients searching my name on Dollars For Docs and finding I received a huge “payment” from Sunovion in Q3 2011.  On the other hand, I would like to learn more about Latuda and whether/how it differs from other antipsychotics on the market (including generic first-generation agents).  If possible, I would also like to question Steve Stahl directly about some of what he’s written about this drug (including his Sunovion-funded articles).  What better forum to do this than in a public symposium??

So at this point, I am looking forward to attending an event to learn more about a new drug—and the opportunity to challenge the experts on the advantages (if any) of this drug over others—.

Patients should recognize that sometimes the only way for their doctors to learn about new drugs is to attend such events (assuming they can remain objective, which can be hard when the wine is freely flowing!).  Admittedly, there are doctors who accept much larger sums as speakers or “key opinion leaders,” but organizations like ProPublica should differentiate those doctors (with whom I, personally, have an ethical gripe) from those who are simply workaday folks like me who want to get as much information as they can, provide effective and cost-efficient care—and maybe inhale a free sandwich every once in a while.

ADDENDUM Sept. 26:  Today I received a phone call from Arbor Scientia (from a number that is actually registered as NEI’s main number—as it turns out, they are located in the same building) to assure me that Sunovion adheres to the Physician’s Sunshine Act provision: namely, that they’ll report “payments” to doctors only after January 1, 2012.  (See also here.)  Interestingly, my local Sunovion rep had told me 1/1/11.  (This is only somewhat reassuring: my Pfizer rep had told me they would start reporting as of 1/1/11, but clearly my “payments” from 2010 were reported.)

This entry was posted on Sunday, September 25th, 2011 at 5:31 pm and is filed under antipsychotics, community mental health, marketing, psychopharmacology. You can follow any responses to this entry through the RSS 2.0 feed. You can leave a response, or trackback from your own site.

50 Responses to “Dollars For Docs” – What It Really Means