Disruptive Technology Vs. The Disruptive Physician

The technological advances of just the last decade—mobile computing, social networking, blogging, tablet computers—were never thought to be “essential” when first introduced.  But while they started as novelties, their advantages became apparent, and today these are all part of our daily lives.  These are commonly referred to as “disruptive technologies”:  upstart developments that originally found their place in niche markets outside of the mainstream, but gradually “disrupted” the conventional landscape (and conventional wisdom) to become the established ways of doing things.

In our capitalist economy, disruptive technology is considered a very good thing.  It has made our lives easier, more enjoyable, and more productive.  It has created no small number of multimillionaires.  Entrepreneurs worldwide are constantly looking for the next established technologies to disrupt, usurp, and overturn, in hopes of a very handsome payoff.

In medicine, when we talk about “disruption,” the implication is not quite as positive.  In fact, the term “disruptive physician” is an insult, a black mark on one’s record that can be very hard to overcome.  It refers to someone who doesn’t cooperate, doesn’t follow established protocols, yells at people, discriminates against others, who might abuse drugs or alcohol, or who is generally incompetent.  These are not good things. 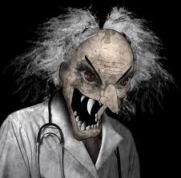 Really?  Now, no one would argue that substance abuse, profanity, spreading rumors, degrading one’s peers, or incompetence are good.  But what about the physician who “expresses political views that are disagreeable to the hospital administration”?  How about the physician who speaks out about deficiencies in patient care or patient safety, or who (legitimately) points out the incompetence of others?  How about the physician who prioritizes his own financial and/or business objectives over those of the hospital (when in fact it may be the only way to protect one’s ability to practice)?  All of these have been considered to be “disruptive” behaviors and could be used by highly conservative medical staffs to discipline physicians and preserve the status quo.

Is this fair?  In modern psychiatry, with its shrinking appointment lengths, overreliance on the highly deficient DSM, excessive emphasis on pharmacological solutions, and an increasing ignorance of developmental models and psychosocial interventions among practitioners, maybe someone should stand up and express opinions that the “powers that be” might consider unacceptable.  Someone should speak out on behalf of patient safety.  Someone should point out extravagant examples of waste, incompetence, or abuse of privilege.  Plenty of psych bloggers and a few renegade psychiatrists do express these opinions, but they (we?) are a minority.  I don’t know of any department chairmen or APA officers who are willing to be so “disruptive.”  As a result, we’re stuck with what we’ve got.

That’s not to say there aren’t any disruptive technologies in psychiatry.  What are they?  Well, medications, for instance.  Drug treatment “disrupted” psychoanalysis and psychotherapy, and represent the foundation of most psychiatric treatment today.  Over the last 30 years, pharmaceutical companies (and prescribers) have earned millions of dollars from SSRIs, SNRIs, second-generation antipsychotics, psychostimulants, and many others.  But are people less mentally ill now than they were in the early 1980s?  Today—just in time for patent expirations!—we’re already seeing the next disruptive medication technologies, like those based on glutamate and glutamine signaling.  According to Stephen Stahl at the most recent NEI Global Congress, “we’ve beaten the monoamine horse sixteen ways to Sunday” (translation: we’ve milked everything we can out of the serotonin and dopamine stories) and glutamate is the next blockbuster drug target to disrupt the marketplace.

Another disruptive technology is the DSM.  I don’t have much to add to what’s already been written about the DSM-5 controversy except to point out what should be obvious:  We don’t need another DSM right now.  Practically speaking, a new DSM is absolutely unnecessary.  It will NOT help me treat patients any better.  But it’s coming, like it or not.  It will disrupt the way we have conducted our practices for the last 10 years (guided by the equally imperfect DSM-IV-TR), and it will put millions more dollars in the coffers of the APA.

And then, of course, is the electronic medical record (EMR).  As with the DSM-5, I don’t need to have an EMR to practice psychiatry.  But some politicians in Washington, DC, decided that, as a component of the Affordable Care Act (and in preparation for truly nationalized health care), we should all use EMRs.  They even offered a financial incentive to doctors to do so (and are levying penalties for not doing so).  And despite some isolated benefits (which are more theoretical than practical, frankly), EMRs are disruptive.  Just not in the right way.  They disrupt work flow, the doctor-patient relationship, and, sometimes, common sense.  But they’re here to stay.

Advances in records & database management, in general, are the new disruptive technologies in medicine.  Practice Fusion, a popular (and ad-supported) EMR has earned tens of millions of dollars in venture capital funding and employs over 150 people.  And what does it do with the data from the 28 million patients it serves?  It sells it to others, of course.  (And it can tell you fun things like which cities are most “lovesick.”  How’s that for ROI?)

There are many other examples of companies competing for your health-care dollar, whose products are often only peripherally related to patient care but which represent that holy grail of the “disruptive technology.”  There are online appointment scheduling services, telepsychiatry services, educational sites heavily sponsored by drug companies, doctor-only message boards (which sell doctors’ opinions to corporations), drug databases (again, sponsored by drug companies), and others.

In the interest of full disclosure, I use some of the above services, and some are quite useful.  I believe telemedicine, in particular, has great potential.  But at the end of the day, these market-driven novelties ignore some of the bigger, more entrenched problems in medicine, which only practicing docs see.  In my opinion, the factors that would truly help psychiatrists take better care of patients are of a different nature entirely:  improving psychiatric training (of MDs and non-MD prescribers); emphasizing recovery and patient autonomy in our billing and reimbursement policies; eliminating heavily biased pharmaceutical advertising (both to patients and to providers); revealing the extensive and unstated conflicts of interest among our field’s “key opinion leaders”; reforming the “disability” system and disconnecting it from Medicaid, particularly among indigent patients; and reallocating health-care resources more equitably.  But, as a physician, if I were to go to my superiors with any ideas to reform the above in my day-to-day work, I run the risk of being labeled “disruptive.”  When in fact, that would be my exact intent:  to disrupt some of the damaging, wasteful practices that occur in our practices almost every day. 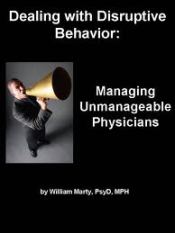 I agree that disruption in medicine can be a good thing, and can advance the quality and cost-effectiveness of care.  But when most of the “disruptions” come from individuals who are not actively in the trenches, and who don’t know where needs are the greatest, we may be doing absolutely nothing to improve care.  Even worse, when we fail to embrace the novel ideas of physicians—but instead discipline those physicians for being “disruptive”—we risk punishing creativity, destroying morale, and fostering a sense of helplessness that, in the end, serves no one.